What is More Important Than a Red Balloon? 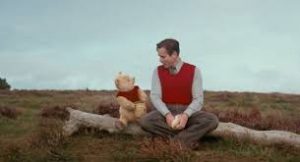 I just watched the movie “Christopher Robin” in which we see Winnie the Pooh and friends rescue an older Christopher Robin from himself.  As a child, Christopher Robin played and spent long hours exploring the Hundred Acre Wood with his stuffed animal friends.  He used his imagination to create stories that most of us heard about as children in the Pooh books by A.A. Milne.   Some wise sayings from Pooh are heard again in the movie.  Specifically, there are a couple of observations Pooh has about doing nothing.  The first is “Doing nothing often leads to the very best kind of something.”  Another is “People say nothing is impossible, but I do nothing every day.”
Christopher Robin as an adult has lost touch with his childhood self and the teachings from Pooh.  After a traumatic tour of duty in World War II, Christopher is striving to achieve success in the corporate world.  The demands of his job in the efficiency department leave him preoccupied to the point that he is missing out on his marriage and family.  His boss puts on the pressure with challenges like “Are you a swimmer, or a sinker?”  He postpones happiness until he can prove that he is a “swimmer”.  He agrees with his boss’s mantra that “Nothing comes from nothing. Dreams don’t come for free, one has to work for dreams to come true.”  When his own beloved daughter asks why he can’t join the family for the weekend getaway, he tells her this same bleak truth, and doesn’t see how opposite it was from his childhood philosophy.
As Christopher reaches a breaking point from the stress, he finds that Pooh has come back to help him.   Pooh saves Christopher by getting Christopher to help him get back to the Hundred Acre Wood.  I won’t spoil the movie by giving away the ending.  However, in the process of helping Christopher Robin, Pooh asks him some very profound questions.  While on a train together, Pooh is enjoying his red balloon and observes that Christopher is engrossed in paperwork from his briefcase.  Pooh calls this briefcase the Case of Important Things.  He asks Christopher Robin: “Is that more important than my red balloon?”  Ultimately, Christopher Robin is challenged to explore what is important in his life.
This movie should hit home for all parents, because it challenges us to reflect on what really is important.  Is efficiency so important that we can’t “waste time” playing or doing “nothing” sometimes?  The world of the Hundred Acre Wood is the ideal of idyllic life lived in the present moment.  The world filled with work and school and sports, social media and texting are the opposite of that.  Living in only in one world or the other, as an adult, will ultimately lead to a disordered life.  The challenge is to strike a balance: To live in such a way that doing nothing will lead to the very best kind of something,  but also doing something that doesn’t leave you with nothing.
What if Winnie the Pooh found you today?  What would you say if Winnie the Pooh asked you “Is that phone you hold more important than your friendships?  Your spouse?  Your kids?  Your self-respect?”   He’s just curious, and challenges you to “think think think.”