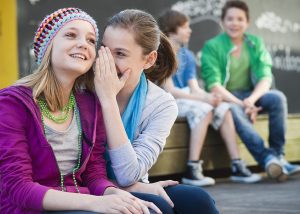 So many books and movies illustrate the struggle that adolescents go through in social relationships. The Hunger Games, Lord of the Flies, and Harry Potter illustrate the social dynamics at work in the middle-school aged social life: Belonging, power, status, identity, leadership, conformity, and intergroup conflict.  I really think that stories like The Hunger Games are wildly popular among “tweens” because they can relate to the struggle those adolescent characters are going through.  And, don’t you think the writers of those stories chose to make their characters adolescents for just this reason?  In The Hunger Games story, Katniss and Peeta are fighting for their survival and they use the group dynamics to that end.  While our middle schoolers aren’t in a literal survival struggle, there is a metaphorical struggle to survive socially.

Social psychology has thoroughly examined this social struggle that middle schoolers experience. For instance, Erik Erickson delineated eight stages of psychosocial development.  The fifth stage, which occurs between the ages of 12 and 18, is called “Identity vs. Role Confusion(hence the middle school struggle)”.  In a very real way, adolescents are understanding who they are through the relationship dynamics that they experience.  Group affiliation provides their identity.  It provides, in a very real way, survival.

We can all label the various cliques we were aware of in high school, including the ones in which we existed socially.  Some kids were considered the leaders and trendsetters for their group; everyone else followed what they wore and how they acted.  The followers in the group conform to this to ensure acceptance, identity, and the status that membership in that group provides.  To be rejected and snubbed by the group you once belonged to can be devastating.  The fear of this happening is very real, and very scary – for some more than others.

We all need belonging.  However, there are some kids who have an intense fear of rejection.  This fear can drive them to do some crazy things in order to secure their social standing and sense of belonging.   A faulty strategy for securing love and belonging is usually at work.   The strategy is approaching relationships strategically.   They have what is called a “scarcity mindset” that drives them to view friends as assets to be acquired.  If you have a child that is obsessed with getting as many friends on social media as possible, you should be concerned about them having this faulty friendship strategy. This is “The Hunger Games” mentality that I see, especially in middle-school aged girls.  In order to ensure their own social survival, they can push those who they see as “weaker” members of the group out.  When this goes on long enough, these powerful but mean girls end up being merely tolerated but not really liked by anyone.  By the time they get into high school, they are alone.  That is unless they change their strategy.

Others kids don’t have such a fear of rejection, and will usually keep their head about them in socially intense situations.  They are more secure in who they are and are less dependent on others for verification of their identity.  Their strategy is approaching relationships to find real friends – people they can enjoy being around and in turn who like them for who they are.  What makes their strategy successful is that they value themselves and they values others.  Their self-esteem, while it may be influenced by others, is not so fully dependent on what others think.

Parents, here is where you can help.  Help your child assess which strategy he or she is taking in forming relationships.  Is he approaching relationships strategically like The Hunger Games or is he approaching relationships for real friendship?  Just flat out ask them about it.  Ultimately, what is needed for survival is a small band of faithful friends.  These are friends that care about the person, not what the person can provide in terms of their status or power.  Encourage your child to be that kind of friend.  Also, encourage your child to find what she likes about herself that is totally immune to what others might say about it.   The following quote by Brené Brown says it well:

“The truth is: Belonging starts with self-acceptance. Your level of belonging, in fact, can never be greater than your level of self-acceptance, because believing that you’re enough is what gives you the courage to be authentic, vulnerable and imperfect.”