Are you a Helicopter Parent?

Parenting has been in the news recently.  New studies indicate that that a growing trend in college, and even graduate school, is parents being involved in managing their child’s (now a young adult) coursework, social life activities, conflicts with professors, and even calling schools to convince them to accept their child as a student!  This shouldn’t come as a surprise, really.  This is the logical outcome of “helicopter moms” and the “hovering” parenting style that has become increasingly common.  Parents didn’t suddenly start micro-managing their child’s life when they left for college, its the way its been all along for that child. 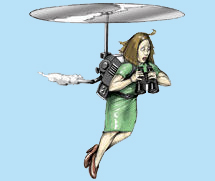 It’s easy to fall into the role of helicoptering and hovering (controlling) as a parent.  We invest a great deal of time, energy and money into providing the ideal environment for our children.  There is a point, however, where this becomes pathological rather than beneficial – not only for our children but as a society.  When we look at the motivations that create hovering and over-controlling behavior in parents, it becomes more obvious why parenting in this way is harmful to children.

One motivation behind the hovering parent is the parents’ ego.  Helicopter parents see their children’s success in life as a reflection on themselves as a parent.  This competition for “parent of the year” starts almost at birth: creating the safest and most intellectually stimulating environment possible for their child.  Then, we put our children in sports as early as possible because we want them to be little Olympians in training.  The helicopter parent in this situation will advocate fiercely for their child to be the star of the team, the head of the class, the best of the best.  The problem, though, is that its not about the child – its about the parents’ image in their own competition with other parents in the community.  While this advocating and managing starts with grade school maneuvering to be the best and most successful of children, it ends with the parent deciding which college the child will attend, and choosing which career the child will enter.  Is it hard to determine whether all these efforts are in the best interests of the child or if its all about the parents’ ego?  One illuminating factor to consider in all of this is who is the most motivated and excited about the child’s activities and interests; the parent or the child?

Another motivator for over-parenting is fear; Fear that the child will be hurt or permanently damaged in some physical, social or emotional fashion and fear that ultimately the child will not reach their potential.  We fear “stranger danger” so we limit for our kids the freedoms we likely had at their age.  We are hyper-aware of the injury risks so we put helmets on them, don’t let them climb trees, tell them to stay out of dirt for fear of worms and infection, sanitize their hands at every change of venue.

If our children get their feelings hurt on the playground or get involved in a conflict with peers, the helicopter parent jumps into the fray to advocate for their child’s rights and defend their innocence.  If the child gets in trouble or gets a bad grade, the helicopter parent calls an emergency meeting with the teacher, principal, coach or youth minister – essentially becoming the child’s defense attorney through life.  All these over-parenting behaviors can be tied back to a strong fear response.  The fear is that if left to figure these things out on their own or fend for themselves, the child will wounded physically or emotionally.

Follow these children to college and you’ll see the same behavior from parents persist from a distance.  Parents are calling and emailing professors to fight for a better grade for the child.  Parents are texting their children in college to wake them up for class, to remind them to do their homework or take a shower, to make healthy eating choices, etcetera.

When as parents we do for our children what developmentally they need to do for themselves, we aren’t helping them!  In fact, we are being harmful to our children.  When we act out of fear, we may be convinced that we are helping.  Stop and think about what message this kind of helping gives the child.  Basically, they get the message that their parents don’t think they can handle the situation on their own.  In fact, recent research on this issue has found a strong correlation between hover-parenting and increased risk of anxiety and depression in adolescents.  It’s no wonder.

If you are a helicopter parent, how can you step back?  How can you make sure you aren’t becoming a hovering helicopter parent?  One important question that parents should ask themselves before taking control for their kids is this: Can my child do what is demanded of them right now?  Not will they succeed, but can they do it if they really tried?  For instance, can your child go to his or her teacher on their own to address a concern?  If the answer is yes, then step back and let them do it.  They may fail.  Failure is part of learning.  It will provide a great opportunity for you to have a conversation with them about what they learned, and what will they do differently next time?

Another piece of advice to avoid being a hover-parent is to let your children attempt to solve their own problems, and when they fail encourage them to try again.  If the problem is they are bored, let them figure out what to do about it and stop being the activities director.  If they can assume responsibility for an aspect of their life, then they should.  The reason this is important is that as children enter adolescence and young adulthood, they look to their parents for affirmation.  Basically they are asking the question “do you think I have what it takes to make it in life?”  As parents, we have to give them the message that we believe in our kids.  You may not always believe them, but you can believe IN them – in their potential and ability to learn.  That is one of the best things you can do to help your children grow up.  Its something they have to do, so let them do it.