What St. Patrick Can Teach Us

Last spring my wife and I traveled to Ireland.  One of our favorite places that we visited there was the Saint Patrick Centre in Northern Ireland.  This museum is located in the region of Ireland where Patrick first came to Ireland from Britain.  He didn’t go there by choice.  At the age of 16, he was captured along with several others by marauding bands of barbarians and taken to Ireland as a slave.  He was a slave there for 6 years and forced to watch over sheep for some farmer.  Some time during his enslavement, he called out to God and had a powerful conversion experience.  He was able to escape his enslavement and made his way back to his family in Britain.  The treacherous journey back to his homeland and family took several months.

Once safely back in the sanctuary of his family home, he had a vision.  In this vision, a man from Ireland brought him letters from the Irish people which said “We appeal to you, holy servant boy, to come and walk among us.”  Paradoxically, Patrick set out for the very place he had just escaped from.  The year was 432 AD when he landed back in Ireland.   St. Patrick soon converted the local chieftain where he landed, and spent the rest of his life as a Christian missionary throughout Ireland.   The picture here is the burial marker for St. Patrick, in the county where he established the first church in Ireland. 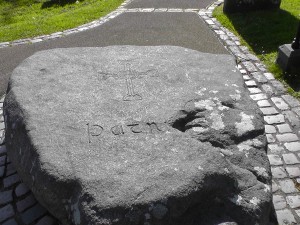 So what’s the big deal about St. Patrick?  Why do we have a big holiday about a missionary in Ireland that lived over 1500 years ago?  Most people don’t realize the significance because the holiday has been reduced to wearing green, drinking beer, and other things we think Irish people do.  It wasn’t driving snakes out of Ireland, but bringing Christianity into Ireland.

For today, I’d like for you to consider some significant things we can learn from his life.  Look at what motivated St. Patrick, and you can find two things that are worthwhile to us all.  First, we see that family relationship are vitally important.  He risked his life trying to get back to his family.  Why do that?  The reason is that our attachments of love and safety in our family provide us with a sense of belonging.  Our identity is intricately wrapped up in our family relationships.  When we feel loved and valued by our family, we seek the shelter of those relationships!  Perhaps St. Patrick, as a youth, took his family for granted.  Maybe he didn’t realize the importance of family ties until those ties were broken.

Secondly, we see the power of purpose in St. Patrick’s life.  The reason we recognize St. Patrick even now is because he was a man of strong will and singular purpose.  He had a strong commitment to his faith and values.  He did not take a passive role in his life, nor did he see himself as a victim.  Instead, his beliefs and values gave him an active role to play in the world.  He did not let fear keep him from living.

These two qualities, valuing family and living out a purpose, are like a train on a rail track.  The train is your sense of who you are; your confidence and your strength.  When we grow up in a loving family environment, we can go out into the world in strength.  The track is your purpose and your direction.  Have a clear vision of what you want to be about in your life, and your track is set.  When both qualities are working well, look out world, because this person is coming through!  That’s a person that knows who they are and where they are going.

Think about that while you are wearing green and listening to The Dubliners this St. Patrick’s Day.