Why did the Grinch Steal Christmas? A Psychological Analysis

This holiday season as I watched “The Grinch who Stole Christmas” I began to think about what made the Grinch so “grinchy”?  Several questions came to mind. Why was his heart two sizes too small?  Surely he wasn’t born that way, right? What’s his problem with the Whos down in Whoville?  What is it about the Christmas festivities and the “noise, noise, noise” that sets the Grinch’s teeth on edge?    Further, what allowed his heart to “grow three sizes that day”? 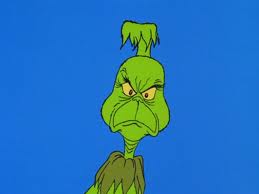 Let’s start at the beginning. The basic psychological assumption that we are born “tabula rasa” says that we become relationally programmed through our early attachment experiences.  We are, however, wired to need love and safety from others.  As babies and children we are very vulnerable and needy.  In psychology, it is believed that every child is entitled to parental warmth, encouraging expectations, love and safety.  When these needs are not met, the child suffers.  So could we say that perhaps the Grinch was unloved and mistreated as a child?

By the time we are in middle childhood (approximately 6 – 12 years old) the need for love and safety extends to our peers and community.  We look to our classmates and others we know for love and belonging, and we expect them to treat us in a warm and trustworthy manner.   Now it is very realistic to expect that others will mistreat us at times, and for our feelings to get hurt.  However, when we experience a pattern of mistreatment from several people the result is deep psychological wounding.

When the Grinch experienced mistreatment as a child, it marred his capacity to love and be loved.  When this happens to people, they are left with the choice to either blame themselves for the lack of love and safety in their lives or blame others.  Oftentimes it’s both.  Blaming of the self for the mistreatment received results in shame.  Thoughts toward the self like “I’m basically bad”, “I’m unlovable”, “I don’t deserve the good things of life” become mantras repeated in the mind.   This results in self-loathing and low self-esteem.

At the same time, there is often an anger and resentment towards others.  This is due to the innate desire for love and belonging that still exists, yet is not being met.  So a destructive entitlement grows in the heart of the mistreated person.  A sense that they are justified in lashing out and mistreating others begins to take hold.  A skewed, unbalanced view of others sustains this animosity towards others.  They are seen as evil, uncaring, undeserving.  Basically, it’s the same thing that a shame-filled person says about themselves.

Just imagine, then, that as a youngster the Grinch had social interactions with the Whos in Whoville that wounded him in some way.  Perhaps he was discriminated against by a few Whos.  Maybe he was overly precocious and impulsive child who was labeled as “ADHD”, “difficult” and “problematic” by teachers – told to quit making so much noise and be quiet.  Maybe the other students in school laughed at him, laughed at his clothes, made fun of his oddities.  Perhaps his family was not included in all the other Who community events, and he never knew why.  The possibilities for how the Grinch was mistreated, shunned, and rejected are endless.  The result, though, is always the same: shame, anger, resentment, and isolation.

In that isolation the Grinch is acting out of his wounded experience.  With only his own thoughts and attitudes, he (like us) will stew in his own juices of hurt, anger, and bitterness.  He will not allow himself to feel anything good – that would take away from his self-hatred and take away from his sense of the injustice he experiences in his life.  This is what “nursing your wounds” looks like; complete agreement with the idea that you are a victim, mistreated, misunderstood.  Therefore, those who have hurt you deserve your retribution.  They don’t deserve to be loved and happy in their lives either!  Just thinking about those Whos going on without him as if all was right in the world sends him into a rage.  This is a narcissistic rage; how dare they make him feel so bad about himself!  There is no awareness that he has become the exact thing that he accuses them of being.

So, the Grinch will be motivated to act out of his pain.  He feels justified in ruining the Christmas festivities in Whoville.  You know the story.  You know “How the Grinch Stole Christmas.”  The most interesting part of the story, though, is what happens next!  In his destructive entitlement moment of victory, he is struck with an unexpected reaction from the citizens of Whoville.  Rather than hearing his anticipated sounds of sadness, he hears gladness!  Instead of crying, he is hearing singing.

The Grinch thought that if he inflicted the pain he felt on them, the Whos would feel the way he felt.  In some ways, this is the wounded self attempting to get some understanding and empathy.  However, the Whos were “proactive” instead of “reactive.”  They were not going to act out of their pain.  Instead, they chose to stay in touch with their values and what was important to them; celebrating Christmas!

The Grinch’s moment of epiphany is realizing that he, like the Whos, can choose.   The Grinch witnessed the Whos choose love over reactive hate.  They chose their attitude rather than letting circumstance dictate the day.  This made it hard for the Grinch to keep them in the box labeled “bad Whos.”  Something convinced the Grinch that perhaps he had it all wrong.  Maybe he’s not that bad, and maybe they aren’t either.  Maybe the Whos in Whoville are not deserving of his worst behavior, and perhaps he can do some good for others.  Maybe there is good in the world.

All our behavior is in service to something.  Our individual responsibility is choosing to what ends our behavior is serving and to stay aware of this process. We can choose to act out of our values, or out of our pain and fear.  This Christmas, and throughout the year, choose like the Whos dos. 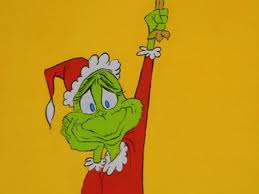