Abraham Lincoln is quoted to say “That some achieve great success, is proof to all that others can achieve it as well.”   Benjamin Franklin writes “Be always at war with your vices, at peace with your neighbors, and let each New Year find you a better man.”  If these great men of history believe in making resolutions, shouldn’t we consider doing so?  Some people believe that making New Year’s resolutions is an exercise in futility.  In fact, Mark Twain is quoted to say “New Year’s Day… now is the accepted time to make your regular annual good resolutions.  Next week you can begin paving hell with them as usual.”

One well known principle for successful goal setting is called the SMART principle, which is an acronym for Specific, Measurable, Attainable, Realistic and Timely.  Being specific means having a clearly defined goal like “I want to be able to run a 5K race by July 4th” instead of a vague goal like “I want to get in shape.”  Making your goal attainable is VERY important.  Is it a goal that you can achieve (given enough motivation, time, and resources).  Next is “keep it real.” Most people fail their resolutions because their goal was unrealistic.  Using the goal of getting in shape as an example; if you expect to just tie on some running shoes for the first time in years and run a marathon on January 1st you’ve set yourself up for failure.  So be realistic in your expectations.  Consider where you are on your path towards successful goal attainment.

The last part of the SMART principle is about timing.  It is super-important to make something happen within the first 24 hours of your resolution.  Use the emotional energy of the moment to get you going!  What could you do on January 1st to start working towards your “in shape” goal?  What is “do-able” on that day?  Set an attainable mini-goal that will be a “baby step” towards your overall New Year’s resolution.  After that, set more sub-goals on a time-table that will work towards your goal.

When it comes to making good resolutions, you have to tie them to your big dreams and values in life.  Furthermore, you have to be willing to risk failure!  The most successful people in the world are also the ones most acquainted with failure.  What successful people do with failure is learn from it and not let it stop them from striving towards their dreams.   So be willing to fail. 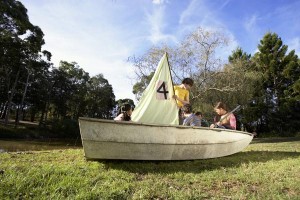 A family story that reminds me of this principle is my Uncle Bud’s sailboat building project.  As a teen, my uncle Bud and a couple of friends decided to build a sailboat.  These boys had never done anything like that before, but they had a dream – a vision of sailing on Lake Chautauqua which was close to their upstate New York hometown.  They went to work in the friend’s basement, and after a few months they had built their own sailboat!

Their first trial was getting it out of the basement.  Not thinking it all through, there was no door big enough to carry the boat outside.  Undaunted by this challenge, they tore a hole in the wall of the basement and dug through the dirt!  Where there’s a will, there is a way! The next challenge was launching the boat at the lake.  This lake is by a resort town and a crowd of “uppity” yacht owners ridiculed their boat as they began to sail out onto the lake.

My uncle says that just a few minutes after this maiden launch they noticed their beloved boat began to take on water – a lot of water.  Several yards from shore, their boat was mostly submerged as they struggled to make it back to land.  Uncle Bud remembers several onlookers watching and laughing at them as their boat ran against the shallows, completely submerged.  What my Uncle did next was admirable.  He says he and his shipmates leapt off the boat charging towards the shoreline with sticks in hand.  In the spirit of buccaneers, they held their sticks like swords and yelled “avast!” to the startled onlookers.   They had the last laugh.

Something I’d like for you to get from this story is that dreamers who become “do-ers” have to be willing to fail.  Another thing to catch from this story is the importance of enjoying the process not just the outcome.   The journey is just as important as the destination!  What will keep you from giving up on your goal is the ability to enjoy the progression and steps involved in attaining that goal!

One last thing to consider: Dreams come true through providential aid, hard work, and luck.  Which of those can you control?  Colin Powell sums it all up with this quote: “There are no secrets to success. It is the result of preparation, hard work, and learning from failure.”  There is no time like the present moment to start making it happen.  Now is the time!