May 8, 2013 | by Patrick Ward
Categories: Family and Managing Media. 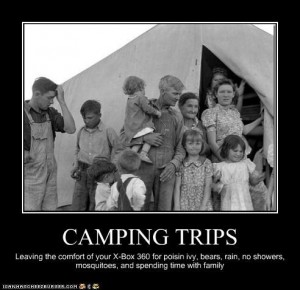 Camping with the family, woohoo!  Our family loves to go camping. 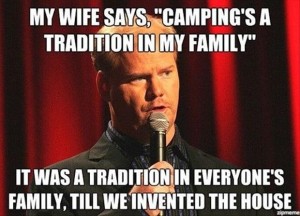 If you haven’t tried it, maybe this story will motivate you.  A couple of summers ago my wife and I decided to take our kids to Stonewall Jackson Lake State Park for a couple of nights of camping.  I’m talking about tent camping.  The “deluxe” tent camping spots have wooden decks for the tents.  So we merrily ambled down the hillside to the decks and pitched our tent, which was difficult because you can’t put tent stakes into wood decks.  Meanwhile, our two oldest kids (12 and 10 at the time) were messing around under the deck and got stung by hornets.   After the 1.5 hours of crying and drama about that we finally got our campsite livable.  Just about 50 feet away at the other tent deck was a couple with one toddler and a baby.  They cried a lot.  The toddler and baby cried sometimes as well.  The couple told us they wanted to go home rather than stay another night, but decided too late and now they were too tired to pack up their tent and leave.

That first night on the deck in the tent would easily put an ex-POW into a flashback.   The temperature dipped down to a low of 89 degrees and the air was still as the dead.  We lay on our leaking air mattress and perspired profusely.  Dawn was a long time in coming.  After the loud party in the RV section of the campground died down, the raccoons came out to scavenge under the deck.  Then the air mattress completely deflated so we are lying on the wood floor.  Of course the kids slept soundly and woke up refreshed and excited for the day ahead!

Thankfully I remembered to bring my French press coffeemaker.  After a strong cup, I was able to open up both eyes and appreciate the lake that stretched out before us.  After breakfast I got in my kayak and took a short tour of the lake with my youngest daughter.  Then the two older kids got a chance to hone their skills in the kayak on their own while our youngest played along the shoreline.   Despite the night before, the morning unfolded in an idyllic fashion.   After lunch we decided to take a hike.  I remembered the couple’s dilemma from the night before, so we quickly took the tent down and decided one night was enough.  We enjoyed the rest of the day at the park, and went home to sleep in air conditioned comfort.

While we have gone camping a lot as a family, I chose this story to demonstrate that even though it was one of our worst camping experiences it is still filled with good memories.  There are so many benefits to this kind of family activity that it far outweighs the calamities you might experience.

One of the most obvious benefits is the time together.  Getting away from the house together for a while means that you leave the to-do lists and other distractions at home.  Most importantly, everyone can get UNPLUGGED.  Getting out of cell-phone range and power outlets gives all of you a chance to go through “technology detox.”  In Richard Louv’s book “Last Child in the Woods: Saving Our Children From Nature-Deficit Disorder” he describes a growing epidemic of “nature deficit disorder” in children.  The hallmark of this disorder is a chronic preference to stay indoors and in front of electronic screens.  The results of chronic exposure to the flashing screens of videogames and smartphones include overstimulation, lack of creativity, increased stress levels, and a deficit of knowledge of how the natural world works.  Just 24 hours out in nature can lead to stress reduction and needed “unwinding” from the busy-ness of modern life.

If you are interested in camping in West Virginia, I recommend you get Johnny Molloy’s book “The Best in Tent Camping: West Virginia.”  It’s a great guide to beautiful camping spots throughout the state.